BearTek was a range of gloves meant to allow users to use cellphones without having to remove the gloves.

The gloves might be used to remotely operate digital devices using different finger motions, allowing you to communicate, produce a movie, or listen to music without removing the gloves.

Rodgers is the CEO in Texas, where BearTek is currently headquartered, while Blount is in Columbia.

The gloves have microscopic sensors that trigger various commands. Tap your thumb on the different touchpads located along the sides of the glove fingers to activate the sensors.

Touching your thumb to a touchpad on the side of your index finger will allow you to answer or hang up the phone, as well as start and stop music.

Who is the founder of BearTek?

BearTek was founded by Willie Blount and Tarik Rodgers from Texas, with Blount based in Columbia. Willie is a motorcycle enthusiast who wanted a safe method to listen to music on his iPhone while riding, while Tarik sought a means to use his phone and camera while skiing without removing his gloves.

They collaborated to develop BearTek gloves, which are ski or riding gloves with blue tooth sensors in the left glove hand.

Different gadget controls are triggered by touching the thumb and one of the fingers together. All of this is accomplished without removing the gloves, resulting in a safer and warmer experience.

The gloves communicate with gadgets using blue tooth modules housed in a pocket on the wrist. There is a module for smartphones and another for cameras.

The gloves cost between $79 to $250, depending on the design and modules included.

Back in 2012, the lads attempted to raise funds for the project through Kickstarter, but their efforts were futile. With $90,000 and collaboration with the Maryland Center for Entrepreneurship, they were able to get the product off the ground.

The goods are widely accessible on Amazon and have become the darlings of the tech/geek/sporting worlds.

What Happened to BearTek at Shark Tank pitch?

Willie and Tarik are looking for a Shark to assist them with production and distribution.

Willie and Tarik enter the Shark Tank pitch seeking $500,000 for a 5% stake in their company, which worth $10 million.

The men enjoy being outside, but they couldn’t listen to music while riding their bikes or skiing. BearTek, they say, converts a glove into a smartphone at their fingertips.

They demonstrate the glove as the Sharks lift their hands in imitation. From their gloves, their module can operate any gadget. They claim to be more than simply a product and ask, “Who’s ready to be embraced by BearTek?”

They demonstrate how they function as they distribute samples. The gloves have six touch points, each of which generates a separate command; the thumb is the primary control, and the module is stored in a pocket behind the glove.

Their current company is selling gloves and modules; the gloves were released to test the concept of the modules, since they eventually aim to be in the module industry.

Because military corporations want to control things with gloves, they feel the company is worth $10 million.

According to Robert, a $10 million valuation requires more than simply gloves. “It’s not working,” Daymond says to the boys.

After a brief pause, Daymond expresses his disbelief that they are worth $10 million. The guys claim that they might go as high as $32 million.

Kevin believes the market has passed them by, therefore he goes out. Mark says he’s out since the risk/reward isn’t there. Daymond goes out because he does not agree with the valuation.

Robert is interested in hearing about items other than gloves; he does not agree with the value and does not want to be in the glove industry for $10 million; he is out.

Lori loves them; she believes they’re clever and have something, but they’re still working things out, so she’s out. Kevin claims that their value was the killed them. Finally, they left the pitch without a deal.

What Happened to BearTek after Shark Tank?

BearTek launched an IndieGoGo campaign without the Sharks’ funding, raising $60,000. Despite the capital injection, BearTek reimbursed all backer money, and the firm website went silent in May of 2019. The gloves are still available on Amazon as of January 2022.

BearTek have many competitors in the market space, these are; BeBop Sensors, Anthro Tronix, Avatar VR and AugMI labs among others.

The company was valued at $10 million during and after the pitch, since then the company went out of business and hence the company net worth is unavailable. 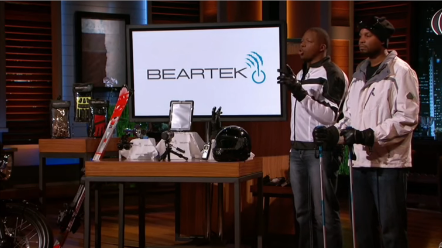 BearTek is an apparel company that specializes in producing gloves with a lot of sensors.

Willie Blount and Tarik Rodgers are the founders of the company.

How much were they asking on Shark Tank?

No, they didn’t have the deal on Shark Tank.

Is BearTek still in business?

No, the company went out of business in May 2019 and hence the company is not in business.

What is the BearTek worth?

BearTek was based out of Maryland, United States.

What is the BearTek phone number?

The phone number of the company is not available on the show or on the website.

Where can I buy BearTek products?

Customers can buy their products on Amazon.com.

Does BearTek have any social media profiles?

The company is not backed by any venture capitalists.

What is the best BearTek glove?

There are four different kinds of gloves to choose from and the best glove for you will depend on your wants, needs and personal preferences.

Yes, BearTek works perfectly fine. In fact, it is working flawlessly for many years now.

How do they work?

The gloves have six different touch points, each of which gives off a command when the user touches his thumb to it.

The module is stored in an internal pocket behind the left hand. As such, a user can operate any gadget through their glove without removing them.

What is the source of funding?

The founders relied on their savings and personal funds, including a Crowdfunding campaign at Kickstarter.

How much revenue does BearTek generate?

How safe are they?

In the event that users crash their bike or ski, their BearTek will protect their hands from injury.

What is the net worth of Willie Blount?

What is the net worth of Tarik Rodgers?

Tarik Rodgers net worth is unknown.