Deci and Ryan Self Determination Theory |

Deci and Ryan Self Determination Theory

What Is Self-Determination Theory?

Self-Determination Theory of human motivation was first developed by psychologists Edward Deci and Richard Ryan. Human motivation, here context, is what moves people to act. The theory looks at the inherent, positive human tendency to move towards growth and outlines three core needs that facilitate that growth. Those needs are Autonomy, Competence, and Relatedness. 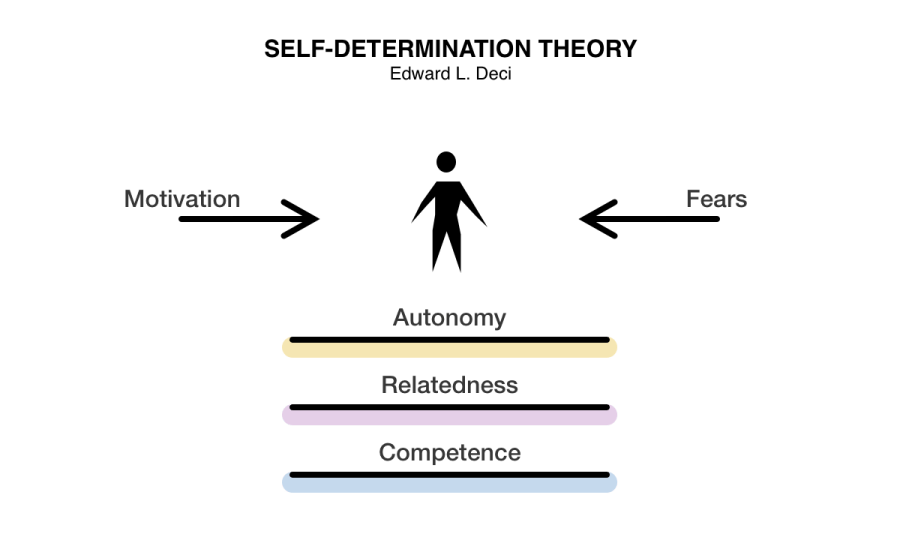 Self-determination theory is comprised of a few sub-theories, including cognitive evaluation theory and organismic integration theory.

Cognitive evaluation theory (CET) was presented by Deci and Ryan (1985) as a sub theory within Self-Determination theory that aimed to specify factors that explain variability in intrinsic motivation.

Cognitive evaluation theory is framed in terms of social and environmental factors that facilitate versus undermine intrinsic motivation, using language that reflects the assumption that intrinsic motivation, being inherent, will be catalyzed when individuals are in conditions that conduce toward its expression.

What are the three components of Self-Determination Theory?

Component so self-determining theory include; 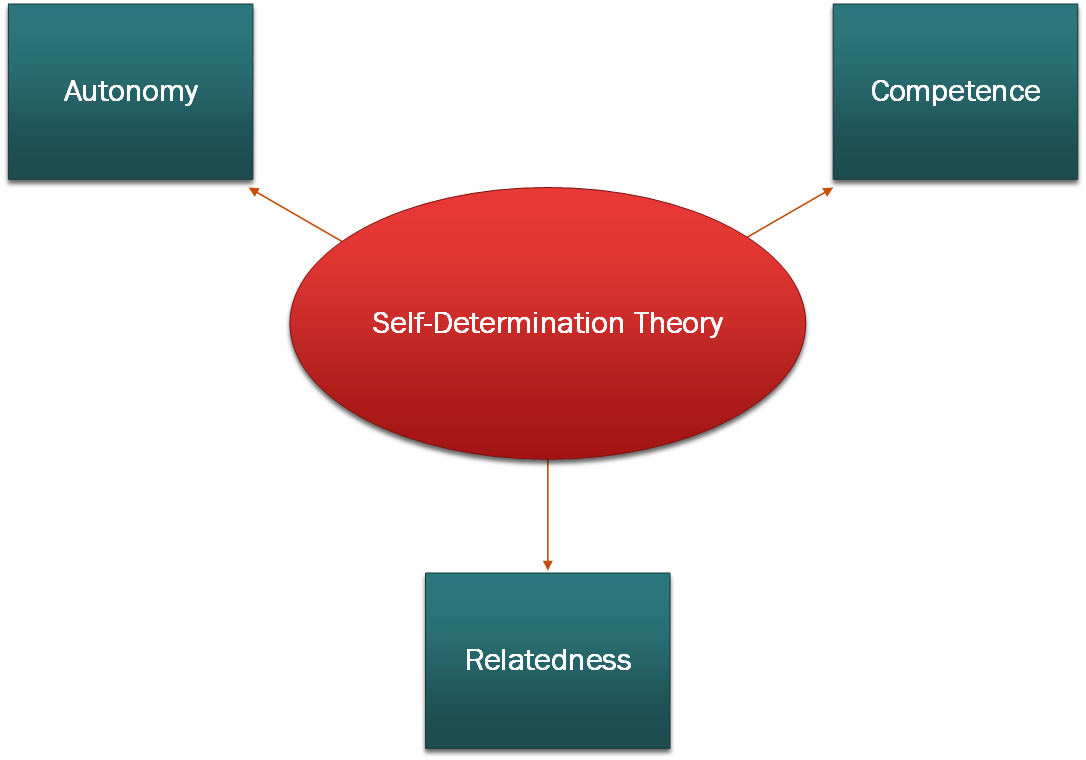 Psychological health requires satisfaction of all three needs competence, autonomy, and relatedness. One or two are not enough.

Here, Deci and Ryan say that they need to have these three needs met for people to be mentally healthy in their lives. These three needs are universal that are needed by people in all cultures.

Researchers have researched with people in many locations of the world, and so far, they have found that these three needs are human qualities and are not specific to particular cultures.

They also note that relatedness is important for intrinsic motivation, at least to the backdrop. In other words, relatedness is needed to be interested in and enjoy things in some aspect of the person’s life.

What is Intrinsic Motivation?

Intrinsic motivation is defined as engaging in a task for the rewards inherent in the task, such as interest and enjoyment.

When people’s needs for competence, autonomy, and relatedness are met, they feel intrinsically motivated.

What Is Extrinsic Motivation?

Extrinsic motivation is defined as engaging in a task for the rewards outside of the task, such as grades or toys.

Some points to note about these definitions are that;

Why is the distinction between intrinsic and extrinsic motivation important? 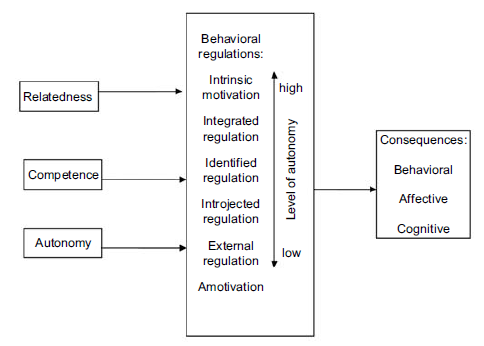 A person is fully autonomous, and the motivation is completely internalized in intrinsic regulation.

A person is not autonomous at all in non-regulation, and the motivation is not integrated at all.

Amotivation in Self Determination Theory

Amotivation is the complete absence of both intrinsic and extrinsic types of motivation. In amotivation, the person does not take any action, or the person is just going through the motions, and they don’t value the activity. They don’t feel competent, and they don’t expect any desired outcomes.

An example of such a person is a student who doesn’t know why she’s in college, majoring in chemistry when she already has her own clothing business and the skills needed to run it so that college won’t help her.

So, she drops out. She doesn’t value chemistry, feels confident in it, and doesn’t expect to do well enough to pass and get a degree.

Given this, it’s understandable that she would drop out.

External Regulations in Self Determination Theory

The next regulation is external regulation, which is part of extrinsic motivation.

Here, the motivation is to satisfy an external demand. In this way, it is pure behaviorism, such as when Skinner gave animals food for acting in certain ways.

An example might be a middle school student who does assignments to avoid confrontation with his parents or a student who takes premed courses to get into medical school because he wants to be a physician only to make a lot of money.

Introjected Regulation in Self Determination Theory

Another type of extrinsic motivation is introjected regulation.

Here, someone starts to internalize it by valuing the activity and taking in regulation but doesn’t accept it as his own. Instead, he does it to avoid guilt or anxiety or to attain ego enhancements, which means that he does it for the sake of his pride.

An example would be a student who selected chemical engineering as her major to prove to herself that she could do it or a student who gets to class on time to avoid feeling like a bad person.

Identified Regulation in Self Determination Theory

Here, the person values a goal, and the action is accepted or personally important. So it’s more internalized because it’s more highly valued than the prior regulations I described.

High school student willingly does extra work in math because she believed it’s important to get into college.

Integrated Regulations in Self Determination Theory

The most integrated form of extrinsic motivation is integrated regulation.

An example would be a music student who takes an extra course in composing, even though it’s not required because it’s consistent with her life goal of being an excellent performer and teacher.

Intrinsic Regulation in Self Determination Theory

Finally, we have intrinsic regulation here.

Intrinsic regulation is really flow, which is peak intrinsic motivation, where a person is so engaged in an activity that she may lose track of time.

An example would be a student who plays video games for long periods of time,

Summary of the Self-Determination Theory

so to summarize self-determination, the theory is comprised of at least two sub-theories.

The first is cognitive evaluation theory, which explains how our competence, autonomy, and relatedness needs lead to intrinsic motivation.

The second sub theory is organismic integration theory, which explains different types of regulations and how activities can come to be valued.

Self Determination Theory in Education

How to promote intrinsic motivation in educational settings.

The most obvious implication is that structures need to support students’ three psychological needs, their need for competence, autonomy, and relatedness.

Supporting these three needs can lead to intrinsic motivation, but they can also facilitate the internalization of values. They can move someone along the regulation continuum from an external regulation towards an integrated regulation.

When teachers facilitate internalization self-determination, researchers call this being autonomy-supportive autonomy. Supportive teachers meet students’ need for autonomy, but they also do other things.

Reeve and Jang (2006) did a study, and they found that the following autonomy supportive teacher behaviors were correlated with students’ perceptions of autonomy.

Another topic that is directly related to the teaching implications for self-determination theory is using rewards and educational settings.

The question is, should teachers give rewards to students for their performance?

To answer this question, we need to understand how rewards affect intrinsic motivation.

Self-determination researchers have studied this, and they found that if rewards were perceived as controlling, students lose intrinsic motivation.

This is consistent with what we would expect based on self-determination theory because, in this case, the rewards would reduce a student’s perceived autonomy.

An example would be a teacher who says you will get to choose a prize if you finish all of your math problems. If a student perceived this as being controlling, then she’d be less intrinsically motivated.

However, if rewards are perceived as informational, students could experience intrinsic motivation because it would support their competence.

An example would be a teacher who gives praise after students do something well.

So this leads to the question Should instructors ever use rewards?

Well, instructors can use rewards; it’s an incentive, or Where does the last resort when nothing else works?

In this case, the teacher should start the rewards small. Don’t tell the student that you’re going to give him a trip to Disney World if he finishes his math homework; tell him that he’s going to get a sticker or a little more free time on the computer if the’s are things that he likes.

The idea here is to follow the basic principles that behaviorists have documented over the years.

An incentive is okay in this case because getting students involved in the activity may lead to new or increased skills.

This may increase their perceived competence and lead to some intrinsic motivation.

Another reason is that the mere exposure to an activity may increase a person’s liking for it. Such is the saying, Try it. You might like it.

A second time where it may be appropriate for instructors to use rewards is when they’re used as evaluation or feedback.

In this case, receiving a reward may signal success at an activity that meets their need for competence and leads to intrinsic motivation.

Criticisms of  Student’s Autonomy in Self Determination Theory

Placing these strategies related to self-determination within the bigger picture of motivating strategies that can be used by instructors to motivate students.

A complete explanation of the music model is provided elsewhere, such as in Jones 2009, and the motivating students’ dot info website.

The music model states that instructors need to ensure that;

These five key principles can be remembered by using the acronym music.

The idea is related to self-determination theory is most related to the empowerment, success, and caring components of the music model because the three needs for autonomy, competence, and relatedness are directly related to these three instructional strategies.

The good thing about self-determination theory is that researchers have provided some concrete teacher behaviors that could be implemented to foster students’ autonomy and empowerment, such as those in the Reeve and Jang study.

Tips On How to Recognize and Avoid Content Duplication

4 Main Steps on How To Write A Good Essay

Value and Demand of Visual Design in Child’s Education