FiberFix is a repair tape comprised of a unique resin and industrial fiber combination. It’s 100 times stronger than duct tape, according to the manufacturer.

Simply soak a strip in water to activate the glue before wrapping it around a leaking pipe, a broken shovel or rake, a fractured water hose, or even damaged furniture.

It takes around five minutes to harden. Customers can also sand and paint it if they choose. “Now you can mend anything,” says the slogan, but there’s one catch: don’t touch it. Because it’s sticky and tough to remove, you should wear gloves.

The idea for a tape that “hardens like steel” came to FiberFix developer, Brigham Young University student Spencer Quinn, after a normal doctor’s appointment, when the doctor told him how, instead of duct tape; he once used medical casting tape to temporarily fix his ATV.

Who is the founder of FiberFix Tape?

Eric Child and Spencer Quinn founded FiberFix. Quinn and Childs developed FiberFix to be a simple repair tool that was as easy to use as duct tape and as strong as the toughest epoxy without the mess.

According to the marketing material, “Once the FiberFix is applied it sets fast and hard in seconds, making repairs fast and easy.”

The packaging claims that it takes “around five minutes” to cure. Quinn estimated that a single strip of tape can cover an area of at least two square meters with a single strip.

With a single strip you can make very strong repairs in places you usually wouldn’t be able to reach applying normal duct tape. You can fix anything, with this tape.

FiberFix has seen on TV” film that is now available on Amazon. If it can achieve what it says, this appears to be a device poised for market success. 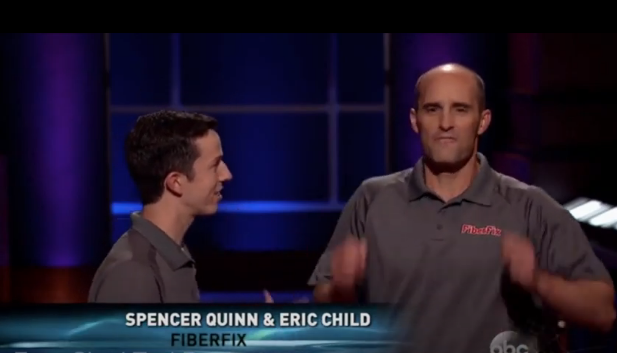 What Happened to FiberFix Tape at Shark Tank pitch?

On October 25, 2013, Spencer Quinn and Eric Child pitch FiberFix on Shark Tank episode 509. Quinn and Childs were on the lookout for a Shark to assist them with mass distribution and maybe infomercial creation.

They instantly demonstrated the power of Fiber Fix by shattering a cinder block with a hammer constructed of two by fours.

They then detailed all the uses for FiberFix, stating the “super tape” allow people to mend things that couldn’t be fixed previously.

They gave the Sharks samples and informed them they’d sold over $100,000 in the last several months.

It’s a brand-new product that’s strengthened with fiber tape. It costs $2 each roll, $4 to wholesale, and $7.99 to retail. They’ve also just become a seller with Home Depot. The Sharks are blown away.

Robert dismisses the offer, stating that he will accept $90,000 in exchange for 10% equity in a hardware distribution firm owned by his closest buddy.

Spencer and Eric then reveal that they’ve signed with QVC. Daymond goes out since he has an HSN deal. Lori then offers $250,000 for 18% equity shares, claiming that QVC with her is more valuable.

FiberFix, according to Kevin, is not fake jewelry or a sponge. Robert wants to know what’s missing from his offer, so he changes it to include a $250,000 line of credit.

The men then entered the hall. While they’re gone, Mark informs the other Sharks that the company is underpriced. Lori claims that women would buy it for their husbands on QVC.

The guys counter offer Lori $120,000 for a 12% stake and a $2 million line of credit. Daymond rolls his eyes as Lori shrugs. Mark tells them they’re wasting their time and chastises them for underpricing their firm.

He claims that they made a strategic error, and that is why he is leaving. They state that they did not examine Kevin’s offer and inform Robert that they would prefer a greater line of credit. Lori says she’d do $120,000 for 12% equity shares but no particular line of credit.

FiberFix need the credit line to finance purchasing orders. Robert goes out because he believes they should be in retail before performing infomercials and QVC.

Lori agrees to $120,000 in exchange for 12% equity shares as long as she finances all purchase orders. They struck a deal with Lori and left the pitch with a deal. 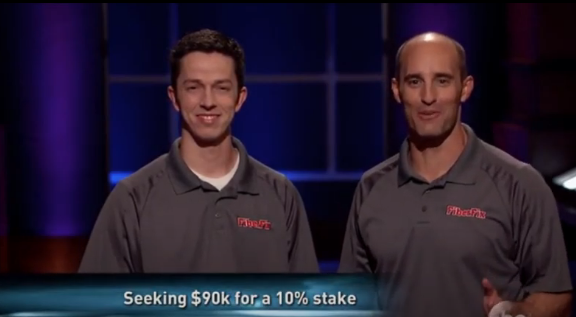 What Happened to FiberFix Tape after Shark Tank?

Lori’s deal was finalized, and the FiberFix crew has been hard at work. They established a call center to contact small hardware retailers, and they are selling like hotcakes.

The warehouse and its connection with Ace Hardware are highlighted in the update piece. Lori’s involvement with this firm ended in October 2018 when it was bought for an unknown value by J-B Weld, the industry leader in consumer DIY adhesives.

As of 2021, it was difficult to locate a retailer that didn’t sell Fiber Fix. Home Depot, Walmart, O’Reilly’s Auto Parts, Lowe’s, AutoZone, ACE, Advance Auto Parts, True Value, and Amazon are among the retailers that carry them.

They have three similar companies offering the same products, these are: Gorilla Glue, UHU, and Liquid Nails.

Net Worth of FiberFix Tape

The company valuation was $900,000 during the pitch, after Lori Greiner investment the company worth $1 million.

Since then the company have been acquired by J-B Weld with unknown sum and hence the company net worth is not available.

FiberFix Tape is a brand of super-strong, waterproof duct tape that can be applied in under 5 minutes.

Yes, the deal was finalized and Lori Greiner invested $120,000 for 12% ownership of the company with a total net worth of $1 million.

Is FiberFix Tape still in business?

No, J-B Weld acquired the company in October 2018 and hence FiberFix Tape is no longer in business.

How does FiberFix Tape work?

FiberFix Tape works by using a substance called polypropylene. When applied to a surface, it allows the substance to bind together, making it waterproof and unbreakable.

How do you use FiberFix Tape?

Step 2: Remove backing paper and apply splicing tape over the crack or break.

How does the company generate revenue?

They also sell them at Walmart, Lowe’s, True Value, Ace Hardware and Home Depot for an additional 25%-30% more per unit.

Who is the current owner?

In 2018, it was reported that J-B Weld purchased FiberFix for an undisclosed sum and now owns the company based on its annual revenues.

How do you use FiberFix Tape?

Just apply it to broken, bent, or dented items, and it will harden within minutes.

How much does FiberFix Tape cost?

It can cost $2 a roll or less on Amazon or at Walmart.

How strong is FiberFix Tape?

FiberFix Tape is up to four times stronger than standard duct tape. This allows users to fix things that were previously unreachable with regular duct tape. It can also be used as an adhesive for other repairs and put in the form of a cord wrap.

In only three months, the firm moved from $300,000 in pre-Tank sales to $6 million in revenues. FiberFix is available via the company’s website, Bed Bath & Beyond, and other shops nationwide.

Is FiberFix a long-term solution?

It’s simple to apply and adheres to most surfaces. FiberFix provides a rapid, economical, and durable solution, allowing users to return to work faster than ever before.

What is the net worth of Spencer Quinn?

Spencer Quinn was the founder and CEO of FiberFix Tape. He has a net worth of $12 million.

What is the net worth of Eric Child?

Eric Child was the President of FiberFix. His net worth is unknown.