Hopscotch Shark Tank Update | What
Happened to Hopscotch after the Shark Tank?

Hopscotch is an online simplifies coding app that allow users to drag and drop coding blocks to construct scripts, which then convert into games that children may share with others on the app or online.

It is a step-by-step way to learn computer coding through bright, colorful graphics and a user-friendly interface for young and inexperienced coders. ‘

Hopscotch game is one of the most popular programming apps at the moment, and it may help students develop their coding abilities.

Samantha John is the co-founder and CEO of Hopscotch as well as the head of the Hopscotch Technologies section,

She was born in Dearborn and raised in Detroit’s Woodbridge district. Her education background include a degree in Applied Mathematics from Columbia University in New York.

Samantha John is a successful entrepreneur who was named one of Forbes’ “35 Women under 35 Who Are Changing the Tech Industry” in 2014.

Samantha, the founder of Hopscotch Technologies, went on Shark Tank Season 12 Episode 15 to pitche her company for investment.

The entrepreneur informed the investor about the startup’s feature growth strategy and invited him to invest in the firm.

She was seeking for a $400,000 investment in exchange for 4% of his company’s stock. Mark Cuban, a Shark Tank investor, eventually sealed the deal for an 11% stake in the firm for $550,000 investment.

How does Hopscotch work?

Hopscotch is a coding app that teaches kids and teens how to create apps, games, and art. The interface of this application has been kept simple so that children can use it effectively.

Through its platform, this application allows the user to create games, stories, and art, among other things, in order to improve his development skills.

Many different tasks are assigned to children to learn coding so that they can improve their programming skills.

This application is now available for Apple users, and an Android version will be released soon. 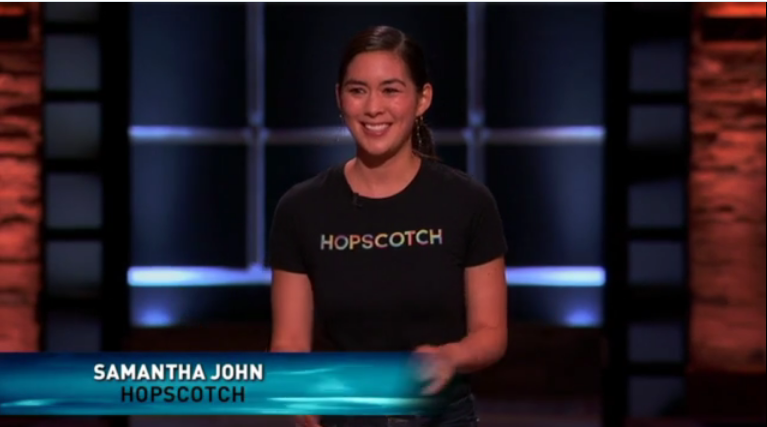 What is Samantha John’s background

Samantha John is the co-founder and main brain behind Hopscotch Technologies, a computer software company.

She earned her bachelor’s degree in Applied Mathematics from Columbia University, where she also minored in English and Comparative Literature.

She worked as a programmer at Pivotal Labs after graduating as an Entrepreneur in Residence at YouWeb Incubator.

While she had been interested in programming and development for a number of years before, she went on to formally establish the now award-winning app, Hopscotch, one year into her professional programming employment.

Hopscotch after the Shark Tank

She came into the Tank seeking $400,000 investment in return for 4% equity of Hopscotch, implying a $10 million valuation.

Samantha managed to convince billionaire Mark Cuban will put up $550,000 for an 11 percent stake, a $5 million valuation

Mark stated that he was already aware with the software because his children had used it.

The business estimates that downloads have surged approximately 500% since the Hopscotch Shark Tank first broadcast in February 2021.

At the time of the presentation, the app was $8 per month or $80 per year to use.

What are the benefits of Hopscotch?

Hopscotch teaches kids to think, improves their creativity, and develops problem-solving skills while having fun creating and playing games on the iPad and iPhone.

Who can use Hopscotch?

Hopscotch is intended for young people aged 10-15, but anyone who wants to learn to code or create their own games can use it.

When was Hopscotch founded?

Hopscotch App Startup was founded in 2012 by Samantha John.

Who owns the Hopscotch app?

Samantha John is the owner as well as the co-founder and CEO of Hopscotch. She also act as the head of the Hopscotch Technologies department.

Which shark tank episode was Hopscotch?

In Shark Tank episode 1212, Samantha John introduces the Sharks to Hopscotch, her coding app for kids.

On the device is a Hopscotch-created game called Kaleidocosmos, a drawing game that repeats drawings eight times to create a kaleidoscopic image that has received 2.4 million plays in the five years since it was created.

What is the business model?

Following the app’s initial launch, John implemented a subscription model in 2015 to gain access to exclusive features, and he now has over 6,000 subscribers.

What’s the issue with a paywall?

She wants to get rid of the paywall and instead rely on the app’s internal currency model, with the goal of eventually allowing users to cash out the currency they’ve accumulated from other players, a move that investors have questioned.

Where Can I Find Hopscotch?

Hopscotch can be downloaded on any Apple or Android device. Although it is a free app, certain advanced functions require a fee or additional costs.

What is the purpose of Hopscotch?

The app is a step-by-step guide for kids ages 10 to 16 to learn user-friendly coding.

The basic app and learning, on the other hand, are free, which makes the product even more appealing.

What sets Hopscotch apart from other apps?

Hopscotch is a creative coding app designed for those aged 10-16 that can be used by both children and adults. It is basically a coding app for kids and teens.

The interactive, arcade-style coding app has taught users how to make a variety of games, including growing a garden and creating one’s own version of Fruit Ninja.

It also introduced a new method of coding music using a few simple steps on the app in May 2020, which became available on the new MacBook in November 2020.

HopScotch is not a traditional children’s game, but it is coding app with game for children.

Samantha John is a business owner of a coding app that allows children to create games. She went to the shark tank show seeking $400,000 in exchange for 4% equity.

How much does Hopscotch cost?

What are her plans for the app?

Samantha hopes to eliminate the subscription service model and replace it with an in-app currency in the future.

What happened on Shark Tank?

Samantha John appeared on Shark Tank Season 12 Episode 15 in search of $400,000 for a 4 percent stake in her programming app for kids, Hopscotch.

Who are the current team members?

The app’s team has grown to include a number of talented and passionate individuals, including product leader and software manager Liz Robuck and creative and Princeton graduate in Computer Science Yuanyuan Zhao.

Who is Jocelyn Leavitt?

Jocelyn Leavitt worked as a teacher at the Dalton School in New York City before collaborating with Samantha to fulfill Samantha’s desire to teach children more about engineering.