Henrik Dahl is a sociologist and researcher from Denmark who in the 1990s developed the People’s lifestyles model called the Minerva Lifestyle Model.   In 1997, Henrik Dahl was chief of research at the Danish company AC. Nielsen.

Henrik Dahl Minerva Model is a theoretical segmentation model that places people in certain categories according to their basic personality values. The model has two dimensions on the vertical axis;

It also has two dimensions on the horizontal axis, namely.

With this, we have four different types of values. The model is a model for segmentation, and it divides people into groups where they have identical patterns towards their attitudes to life, especially towards buying behavior.

In north and south, we have theocracies. It values modern and traditional.

Modern; We understand people who are keen on new technology and welcome everything that is new.

The traditional: people are opposed to many of the new technologies and often a bit scared of all the new developments that are taking place, they appreciate traditions and good old-fashioned values.

Looking at the vertical dimension, we also have opposite values. The East Side represents idealism on the West, Materialism,

Idealistic: Idealistic persons care about sustainability and the environment. They also care about family and good living conditions.

Materialistic: The people who think materialistic only appreciate things like expensive cars and houses. They show their success through their purchases.

In this division, we get four squares with some common values for those who are placed in the same fields in terms of value.

The four squares and segments are named

The grey in the middle is more recent and represents mainly young people who have not yet established lifestyle patterns. 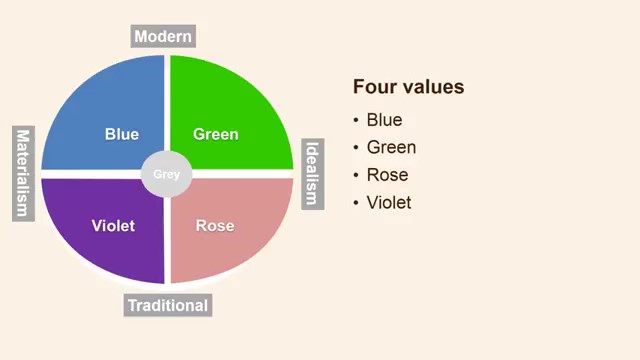 People in the blue segment put emphasis on achieving results and career.

The green people emphasize self-realization on the ability to change with time.

The violent people attach importance to everyday practical tasks and are not interested in communities beyond family and friends.

The gray segment was added to the model several years later. This segment consists of young people who have not yet found their own preferred lifestyle.

The Minerva model is relatively simple to use in segmentation and in decision making about media choices on other decisions related to marketing activities.

However, the model is used best in combination with the traditional socio-demographic variables such as age, gender, education, income, family structure, and living conditions, place of residence.