Hypodermic needle theory was developed in the 1930s and 1940s after researchers observed the effect of propaganda during World War One and events like the Orson Wells War of the Worlds broadcast. 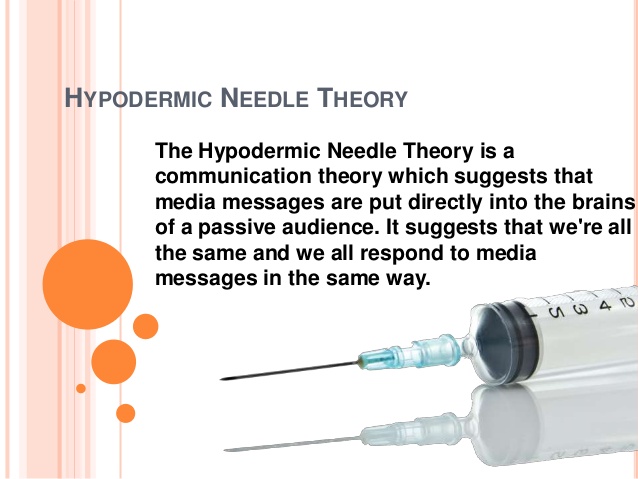 This theory suggests that media messages are sent straight to the audience, like an injection from a needle. These messages go to the audience without any interference or negotiated meaning. That is, the audience simply absorbs the message without actually thinking about it themselves.

It views the media as all-powerful, and the audiences are passive consumers. This way of thinking about communication media influence is no longer really accepted.

In the 1930s, many researchers realized the limitations of this idea, and some dispute whether early media theorists gave the idea any serious attention at all.

Nevertheless, the hypodermic needle theory continues to influence the way we talk about the media. People believe that the mass media has a powerful effect.

Parents worry about the influence of television and violent video games, News outlets run headlines like Is Google making a stupid, and Grand Theft Auto led the team to kill.

So how did this way of thinking about the mass media develop?

In 1927, Harold Lasswell, an American political scientist and communication theorist, published a book called Propaganda Technique in the World War. Writing about the effect of fellow propaganda during World War One, Last Well wrote;

from a propaganda point of view, it was a matchless performance for Wilson brewed the subtle poison, which industrious men injected into the veins of a staggering people until the smashing powers of the allied armies knocked them into submission.

The hypodermic needle theory rose to popularity in the 1930s when the world was a war because it’s seemingly explained how audiences could be so easily persuaded by war propaganda. Both sides of the war used propaganda to get their citizens motivated to enlist in the military or give money towards the war.

This propaganda was seen in a while and distributed via all media forms, newspapers, radios, posters, and film.

The Pain Fund studies, which were conducted between 1929 and 1932 and looked at the effect movies have on Children, also contributed to this idea that the mass media has a powerful and direct influence on audiences.

Although these studies have been criticized for their lack of scientific rigor, they were really one of the first and most comprehensive examinations of how the media works.

Writing about the influence of movies, the project chairman, W. W. Charters, wrote that they have the potential to affect the way the Children behave profoundly.

Even in the 19 thirties, However, researchers started to realize that this way of thinking about media influence was inadequate.

Some evidence was put forth to support the hypothermic needle theory focused on the negative impacts of the media. It is where a message would be broadcast, and the audience would just buy that media’s message, hook, line, and sinker. Often this evidence was anecdotal, and it wasn’t scientifically tested.

One key piece of evidence to support this Hypodermic Needle Theory was a story about a radio broadcast.

On October the 30th, 1938, Orson Welles, who was a famous director, later directed films like Citizen Kane in a Touch of Evil,  directed a radio dramatization of a program called War of the Worlds. It went like;

Ladies and Gentlemen, I have a grave announcement to make. Incredible as it may seem, both the observations of science and the evidence of our eyes lead to the inescapable assumption that those strange beings who landed in the jersey farmlands tonight are the vanguard of an invading army from the planet Mars.

The battle, which took place tonight that grove of Mills has ended in one of the most startling defeats ever suffered by an army in modern times. 7000 men armed with rifles and machine guns pitted against a single fighting machine of the invaders from Mars. 120 known survivors, the rest strewn over the battle area from Grover’s Mill to Plainsboro, crushed and trampled to death under the metal feet of the monster, are burned to cinders by its heat rate.

The program, which was presented in the form of a news bulletin, caused some listeners to believe that Martians were invading the earth. The New York Times claimed that thousands of people were gripped by mass hysteria.

Because of its presentation as a news bulletin, audiences at the time reacted to it like it was real and like they were actually experiencing a real invasion. Many of the audience loaded up guns in anticipation of war.

Other information about the bulletin include;

In Bergenfield, New Jersey, just north of Grovers Mill, some 20 families turned up at a police station, with all of their household possessions piled into their cars.

In Indianapolis, a woman rushed the pulpit in a Methodist church shouting at the end of the world had come.

In Washington state, a spectacularly ill-timed power failure plunged the small town of concrete into darkness and sent terrified residents fleeing into the mountains.

While thousands of people may have been panic-stricken, they were only a small proportion of the six million people who enjoyed a quiet night around the radio.

On the surface, events like these seem to suggest that the media can have a powerful influence on audiences.

Nevertheless, the hypothermic needle theory is kind of inadequate to describe the process of communication and media influence.  It just doesn’t work.

Criticism of the Hypodermic Needle Theory