What is the Marginal Benefits Curve?

The marginal benefit curve is a graph that shows the relationship between how much you consume of a good and its total benefits.  It is represented by the line’s slope on a graph, which can be calculated using calculus.

A consumer will stop consuming when they reach their optimal point, where the marginal benefit equals zero.

One type of example would be meat. If a certain amount of meat you need to consume and eat more of the meat will make you feel icky, you will not continue to eat the meat.

Why is the marginal benefit curve downward sloping?

The change in value gained from a good or service when an individual consumes one more unit; the slope of the individual’s demand curve at its point of intersection with the marginal utility curve.

The downward slope in a marginal benefit curve indicates that individuals are becoming less satisfied with an additional benefit received. As the quantity of a good or service is increased, the marginal utility of a good may decrease.

Marginal benefit is the change in total utility that occurs when a consumer increases consumption of one good by one unit.

In other words, marginal benefits are measured as how much you gain from consuming more of something.

Assume that James can drink 1 or more cokes per day, then marginal benefit from drinking coke for a particular day is given in the table below. 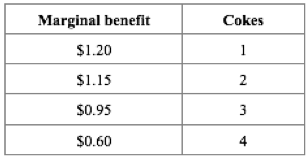 This shows that she values the first coke she drinks at $1.20, the second at $1.15, and so on. This means that for each additional unit consumed, the consumer derives less and less satisfaction from it.

Why is the marginal benefit curve equal to the demand curve?