There are a few critical components to a successful negotiation that are often not considered by the bargainer. They are the BATNA, the reservation point, and the bargaining range.

It is a fundamental concept in negotiations and not necessarily intuitive. It comprises the most favorable scenario in the case that the deal being negotiated is not made.

What is BATNA in Negotiation?

BATNA stand s for the Best Alternative To a Negotiated Agreement and is the most advantageous course of action and negotiator can take if they’re at an impasse with their bargaining partner and cannot reach an agreement. 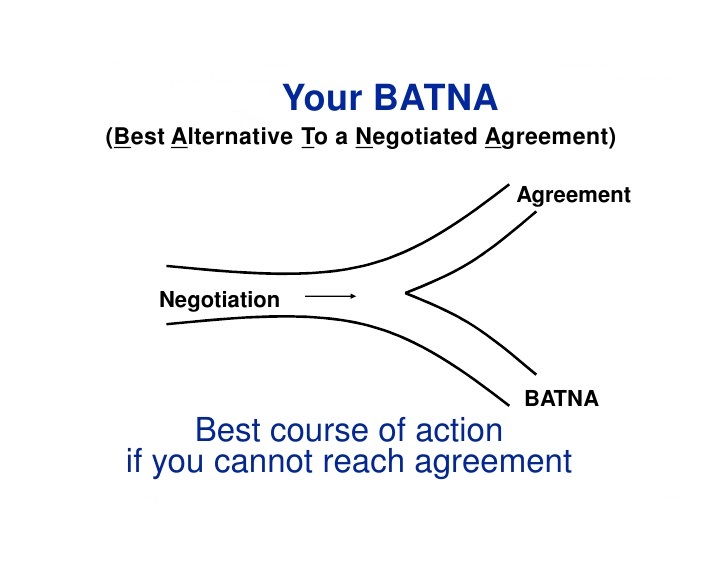 This is an alternative course of action you can take, and it is necessarily outside of the negotiations. It is not a bottom line or the minor favorable terms you’re willing to agree to.

The BATNA is a way out from a bad deal. Think of it as having a side deal. It’s something that can act as a leverage point and is an insurance policy.

The core utility of a BATNA is it protects you from accepting an unfavorable deal. The rule of thumb is to accept any better terms than BATNA and reject any worse offer. It is a precious value compass.

The purpose of negotiating is to see if you can get your interest achieved through an agreement. An interest is why you want something, not what you want.

When negotiators start working from the standpoint of interests, they could begin to work with the other party to explore alternative solutions.   A problem cannot be solved to everyone’s satisfaction unless all parties understand why they want something in particular. Only then can the process of problem-solving begin. The actual negotiation comes much later on in the process.

Start to look at the options ideas that are worth testing to see if they meet your interests, and then think about selecting those options that you will seek as a potential outcome in the negotiation.

There are three steps to determining what your best alternative is.

NOTE: This is important; you must remember to translate your BATNA into the language of the negotiations you are about to enter.

This is necessary if you want to be certain, you will not be walking away from a decent deal for a worse BATNA.

An example is an employee negotiating a salary race; he will have a very good BATNA if he has a higher salary job offer in another company,

He will have a very weak BATNA if he does not have any job offer, and on top of that, he depends on the additional money to pay for important things.

His boss’s BATNA will be very good if he does not depend on the employee with whom he is negotiating because he is able to quickly and effectively replace him with another employee or an external candidate already identified by HR.

His BATNA will be very weak if the employee executes a highly specific and important function with no easy replacement.

In this example, we can note that if both sides have weak BATNA, the probability of reaching an agreement that both sides are comfortable (salary rates and keeping the employees in the company) is higher than in the case where both sides have very strong BATNA.

They will probably not make the same effort to reach an agreement.

When one side has a better BATNA than the other, it has more power in the negotiation and more chances of having its interest met if it does not use force to overpower the weaker side, who can decide to abandon the negotiations due to the way the process is being conducted.

BATNAs can change over time, becoming stronger or weaker, and the negotiator can frequently improve his better before starting negotiations.

For example, knowing that he will need a salary raise, the employee can look for another job before starting negotiations with his boss.

The same happens with the boss. He can look for possible substitutes for the employees before the salary negotiations.

The other negotiator’s BATNA may also be unknown, and sometimes one negotiation side can bluff. That is, act as his BATNA is stronger than it is.

For example, if you consider switching insurance companies and say Company A offers a plan with a 10% annual rate increase. Company B has a policy of 30% less than the Company A rate.

You start leaning towards signing with Company B, but you decide to be cautious and make more calculations.

You dig deeper and call both companies to discuss their options and notice some finer details to the company B terms.

You translate both policies into what they mean financially and make the prices comparable by period.

You conclude you will be better off with Company A renewal rates than with Company B. But if you hadn’t spent the extra time, you would have opted out for the worst option.

Do you see what we mean by translating a BATNA into the terms of the current negotiation?

BATNA must correspond to a real and possible set of events in the world. It should not be a made-up scenario you hold on to as a safety net that would defeat the purpose of having a BATNA.

And like in a real-life scenario, a BATNA can change due to shifts in the market. It is a dynamic concept that adapts to different circumstances.

A great negotiator would prioritize constantly trying to improve their own BATNA and spoiled out of their opponent.

Once you have identified your BATNA, should you reveal it to your opponent or keep it a secret?

If it is a strong BATNA and you are certain it is better than the other side thinks it is, you should lay it on the table.

Your bargaining partner will likely stop negotiating as if you have no viable alternatives, and the conversation will become more beneficial to you.

However, if you think your BATNA is weak, it will be best if you do not openly discuss it.

What happens if you do not have a BATNA at all?

Very often, the negotiator without a BATNA will find themselves in an insecure position.

They will either feel pressured to reach an agreement at all costs because they do not think they have other alternatives or end up being over-optimistic about the offer on the table because they lack perspective.

In any case, saving resource is by not exploring your BATNA usually result in much poorer negotiation outcomes in the longer run.

A BATNA analysis helps you to determine each party’s reservation point. If there is a set of resolutions that both parties would prefer open impasse, then a Zopa exists. That is a zone of possible agreement.

You can see the position of Negotiator one and their BATNA and their preferred option.

And underneath, you can see negotiated to with the BATNA and their preferred option, you can see in the middle we have an area of that is the zone of possible agreement.

Recognize the long, contentious parts of this negotiation. These will allow you the opportunity to build on that sphere of goodwill and to start a working relationship in a collaborative state.

The essence of negotiating lies in trading off some of the aspects to gain others. The more you know or understand the other side’s position, the better you will negotiate a favorable outcome.

If you want to do business with this person again, beware of ringing out every concession, as no one likes to feel that they’ve lost.

Lewins Force Field analysis is a great visual tool to help you consider the key elements you have identified in terms of their strengths and their weaknesses and your strengths and weaknesses in the negotiation position.

With the lying down the center being where we are now, the status quo, the arrow’s fat, the stronger their stance.

The closer to the line is how important it is to them. It’s a visual representation of the ZOPA tradeoffs.

Most people think about negotiating using a zero-sum process. They determine what they want, raised that by 10 or 15%, then engage in a series of compromises to obtain a result.

Think about buying and selling houses. The effort is on their position and claiming as much of that position for themselves as possible. It is quite stressful.

The essence of Zopa, the zone of potential agreement, allows you to create a much more collaborative environment.