What is Behaviorist Theory?

Behavioral psychology is the idea that all actions, whether by man or animal, are all learned behaviors and can be learned and unlearned.

It basically understands how we form associations in our minds when certain things happen together over time (e.g., if someone gives you a cookie every time they say “hi,” then eventually hearing them say “hi” will make you want to eat that cookie).

This type of association generally takes place unconsciously through observation or repetition of events that lead your brain to think.

Operant conditioning is a form of learning in which an individual learns to produce certain behaviors after the consequences that follow them. It is when you associate different behaviors with consequences.

Operant Conditioning, sometimes called Skinnerian training, is a type of behavior modification that relies on rewards and punishments as reinforcement for desired behaviors while discouraging undesired ones.

It operates on the principle that all organisms are naturally curious and will repeat actions that lead to pleasurable sensations or avoid actions associated with pain or discomfort.

A common example of operant conditioning is training a dog to sit by rewarding it with food when they sit.

While some might be quick to label this method as a cruel punishment for disobedience, research has shown positive results from such methods because it teaches individuals how their actions influence other things around them.

The thing a lot of people think about when they hear behavioral psychology is Pavlov’s dog experiment.

Pavlov used to ring a bell every time he fed his dogs, and eventually, the dogs learned to associate the sound of the bell with food. And as a result, they salivated every time the bell rain, whether there was food or not.

In a nutshell, Pavlov discovered a process in which a previously neutral stimulus evoked a specific response by repeatedly paired with another stimulus that evoked the response.

If a reward or reinforcement follows a stimulus’s response, then the response becomes more likely in the future.

How does behavioral conditioning relate to second language acquisition?

In the fifties and sixties, it became popular to apply behavioral psychology to all types of learning, including language learning.

Two psychologists most known for applying behavioral psychology to learning and especially language learning, are John Watson and BF Skinner.

This application of behavioral psychology to language learning eventually led to the behaviorist theory of second language acquisition.

What exactly is the behaviorist theory of second language acquisition (SLA)?

Many theories can be used to describe second language acquisition. Some of the most prominent ones include behaviorist theory, cognitive theory, and social interactionist theory.

While there are several others, these three have been around for quite some time and have seen much research done surrounding them.

There is no one way to learn a new language; however, with so much research behind each of these theories, you will be able to determine which one may work best for you based on your learning style and personal preferences.

According to the BF Skinner Operant Conditioning Second Language Acquisition, the foreign language behavior learner is the organism whose behavior is being conditioned. The behavior is verbal behavior.

The stimulus is what is taught or presented in a foreign language. The response is then the learners.

Reaction to the stimulus and the reinforcement are the teacher’s approval and praise and fellow students and self-satisfaction.

Language mastery is represented as acquiring a set of appropriate language stimulus-response chains.

What is the Audiolingualism approach to language teaching?

The Audiolingualism Approach is a teaching method that emphasizes listening comprehension, pronunciation, and speaking skills.  It was developed in the 1940s by American linguist Charles C. Fries at Stanford University.

in  Audio Lingual Method,  Dialogues, and drills form the basis of learning. Dialogues were used for repetition and memorization; correct pronunciation, stress, rhythm, and intonation are emphasized.

Furthermore, one of the results of treating learning as behavior was that meaning was excluded from consideration, especially during the early stages.

Because the focus was on forming a habit, it really wasn’t important for a foreign language learner to know what they were saying, just that it was being said correctly.

In the beginning stages of learning via Audiolingualism, the focus was on oral language. Written language wasn’t introduced until more advanced learning stages because it was thought to interfere with habit formation.

Audiolingualism peaked in 1960 when it was widely used in classrooms across the US to teach foreign languages and the teaching of English as a second language.

But the popularity of the theory didn’t last for long. Results fell short of expectations, and students could not transfer skills to real communication outside the classroom.

Plus, many students found the drilling memorization and repetition to be, quite frankly, boring.

Also, in late 1960, the linguistic theory began to take a different direction. Part of the reason for this is MIT linguist Noam Chomsky’s rejection of the behaviorist theory of language learning.  ‘Language is not a habit structure,’ Chomsky said. 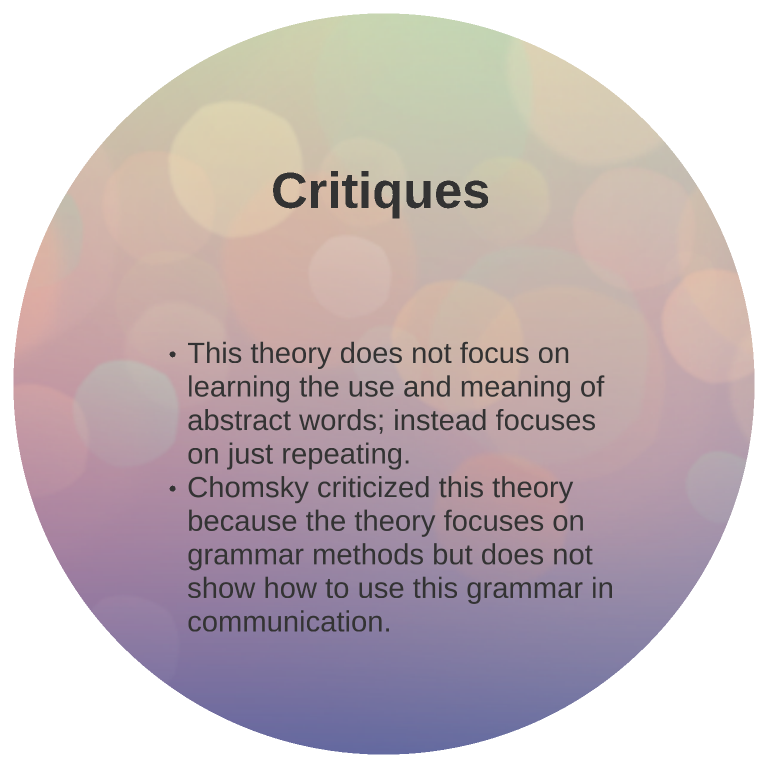 Chomsky argued that much of human language use is not imitative behavior. Instead, it’s created from underlying knowledge of abstract rules.

Even though the use of the Audio Lingual Method has declined drastically since the sixties, the basic premise of the behavior’s theory continues to influence many teachers, thinking about how his second language is learned.

In fact, even if he didn’t go to school back in the fifties and sixties, you can probably still remember some teaching strategies that your classroom teacher might have used, like dialogue, repetition, and drilling, that can be traced back to the behaviorist theory.

In conclusion, language learning further behaviorists is a matter of conditioning through imitation reinforcement and habit formation.

And although this theory has its shortcomings, it has some merits as well and still influences the teaching of second languages in some ways, though certainly not to the extent that it did when it was first introduced.