What is the Cournot Model of Oligopoly?

The Cournot Model of oligopoly is based on a mathematical model that explains how firms in an oligopolistic market will compete.  It is an oligopoly, meaning that there are only a few sellers of a particular good or service in the market. The model predicts the behavior of a group of firms that are competing with each other.

The Cournot Model of oligopoly is a model that Antoine A. Cournot first proposed in 1838. This model can be used to predict how many firms will enter and exit an industry, as well as the price and quantity levels of those firms in response to changes in demand, cost, or other variables.

The Cournot model of oligopoly is a few assumptions that are made to simulate the market. It is based on the idea that firms do not know each other’s production decisions. This model assumes that the firms are all profit-maximizing and that a large number of firms produce the same product or services. The first assumption that is made is that there are a lot of firms in the industry.

The model also assumes that each firm has the same cost for producing one output unit, which means they are all price takers.

The Cournot Model is an approach to oligopoly that assumes that firms produce a homogeneous good and are assumed to be aware of each other’s production.

The model is based on the assumption that firms have some degree of market power. There can be up to 2 firms in the market. They are not aware of each other’s production and its cost.

The Cournot Model is an economic model that shifts the focus from the number of firms to each firm’s characteristics. In Cournot’s model, firms decide to produce several goods that maximize their own profit.

This means that a firm will produce the number of goods at which the marginal revenue curve intersects with the marginal cost curve. The decision to produce will be affected by the total output of the other firms in the market. In the model, each firm produces a quantity that it believes will maximize its individual profit while considering the other firms’ outputs as revealed to them through their production decisions. In this way, one firm’s output decision depends on what it perceives to be the output levels from all the other firms in the industry (its competitors). 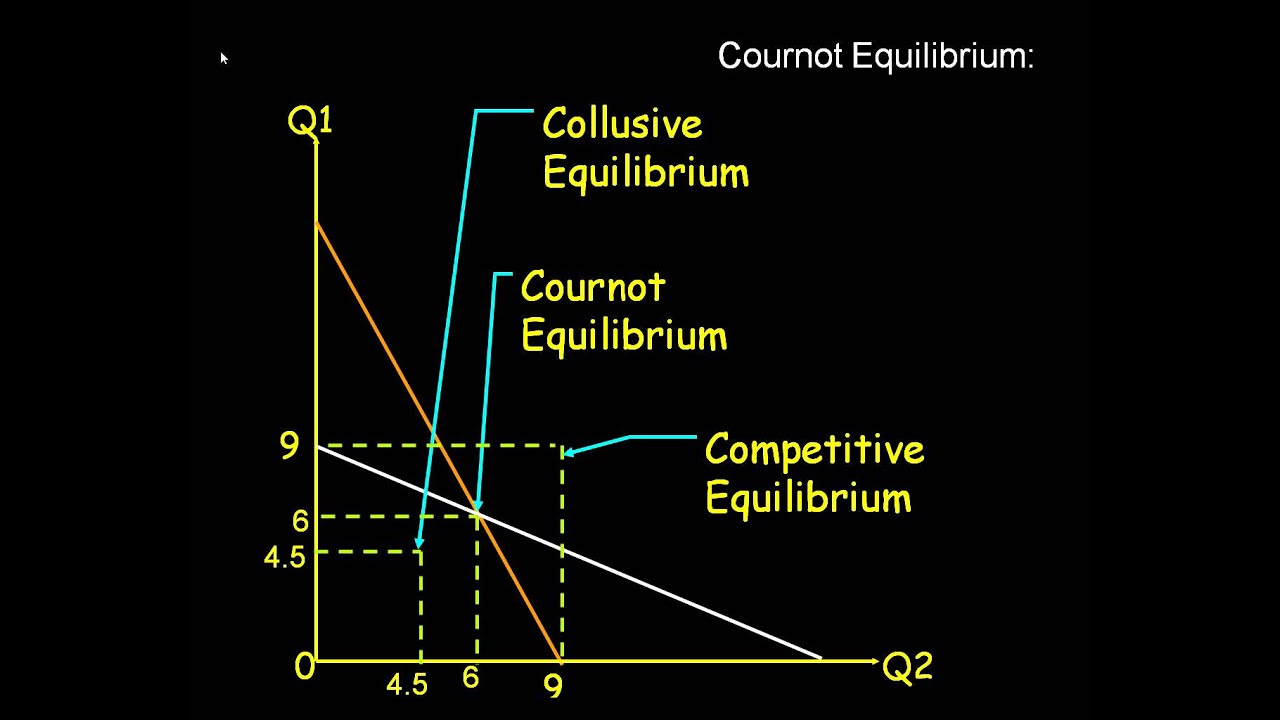 In the Cournot model, each firm will know how much its rival firm sells and what other firms sell. With such information, firms will be able to ‘anticipate’ how much they need to produce to satisfy their own demand curve and their own supply curve. So, every firm (or group of firms) can plan their production based on what they anticipate will be the level of demand of the other firms or groups of firms in the market.

The Cournot model is useful when economists want to understand why oligopolies exist and to understand how the price of a product changes when there are few competing firms.

The Cournot Competition Model is derived from the previous models and has a general form of:

(a,b) refers to quantities demanded and supplied of a good, respectively;

T stands for total revenue earned by firm I;

S stands for the total cost incurred by firm i.

The symbol C can be interpreted as the total profits earned by all firms at any point in time.

Therefore, this model does not accurately represent real-world oligopolies where firms possess incomplete information about their rivals. In addition to this, it was assumed that the demand curve was a decreasing function.

The Cournot model’s main advantage is that it provides a framework for economists to study oligopoly based on one firm’s decision regarding production levels, rather than in terms of individual firms as described in other models.

The assumptions made about the Cournot model are too unrealistic because it can explain the case when no firm ever increases their output, for example. In other words, each firm would like to know what every other firm is going to do. But in real practice, the companies will never know all the decisions that other firms will make.

Of course, this model was first applied to a single-market situation. The firm-level analysis of oligopoly is a useful tool for doing theoretical work on firm dynamics and for predicting market outcomes.

Product features that affect the price are important variables when studying Cournot models. For instance, the price of a product can be set by demand and supply curves which are different for each product. The Cournot model does not take into account the pricing process. It is a static model that assumes that the price of each product is fixed exogenously.