Pareto principle is the famous 80/20 rule. It’s the idea that things like 80% of the complaints come from 20% of the customers and in the words of Joseph Juran, it’s that there is a vital few things that have the vast majority of the impact and all the rest of the things of the trivial many.

Guide to Online Shopping in 2022

Laws and Regulations to Consider Before Starting an Online Liquor Store

The Pareto principle’s key idea is that a small number of things lead to the vast majority of the result.

The Pareto principle was developed by the quality guru Joseph Juran in 1940, inspired by the work of Pareto, the 19th-century economist.

What Juran did was take this idea and apply it in the context of quality control and manufacturing.

The traditional or standard application of the Pareto principle is that 80% of the defects are due to 20% of the causes. That is, a small number of causes are responsible for the vast majority of the defects.

When you look at a process and the potential causes of defects for that process, the vast majority of the defects will be due to a tiny number of possible causes.

The Pareto Principle is important for Lean Six Sigma practitioners to analyze the most crucial processes within an organization and identify problems that will result from a small number of causes. The Pareto Chart provides additional detail by displaying the causes of defects and showing how often these defects occur or how much they cost.

This is the idea that’s taught in all quality focused course and training. It’s absolutely standard in the area of quality management and six sigma.

Juran created a diagram or chart to go along with this idea of the Pareto principle, and the Pareto chart is one of the seven basic quality tools. The tools include;

A check sheet is a structured, prepared form for collecting and analyzing data, a generic tool that can be adapted for a wide variety of purposes.

A control chart is a graph used to study how a process changes over time. Comparing current data to historical control limits leads to conclusions about whether the process variation is consistent (in control) or is unpredictable (out of control, affected by special causes of variation).

The most commonly used graph for showing frequency distributions, or how often each different value in a data set occurs.

Pareto Chart is a bar graph that shows which factors are more significant.

Scatter diagrams are graphs of numerical data pairs, one variable on each axis, to look for a relationship.

Stratification is a technique that separates data gathered from a variety of sources so that patterns can be seen (some lists replace stratification.

A Pareto chart is a bar graph with one bar for each of the possible categories of causes. These bars are then ordered by frequency, from the most frequent to the least frequent.

The most important cause goes first, and in addition to this chart, the cumulative distribution is usually also drawn. 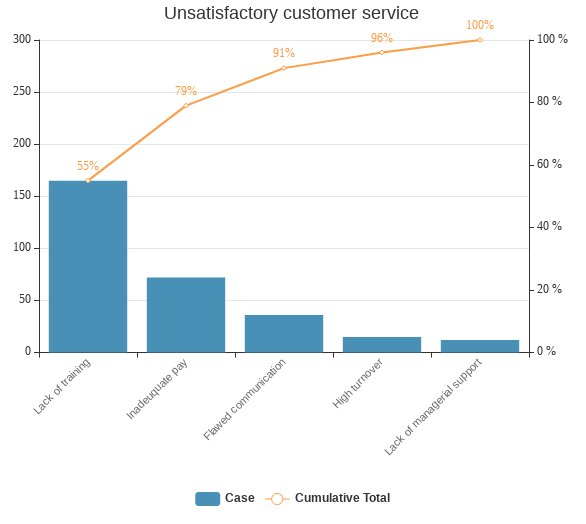 What you can see is that we have a list of possible causes.

These factors are plotted in the bar graph the percentage contribution to the problem of unsatisfactory customer service.

You can either plot the number or plot the percentage, and those bars have now been ordered by the most frequent.

In this chart, we can see that lack of training is the leading cause of the problem of unsatisfactory customer service.  Next and then issues relating to lack of adequate pay.

But the basic idea of the Pareto principle is that 20% of these causes will result in 80% of unsatisfactory customer service.

Now, also, on this chart, there are plotted the cumulative distribution. For example, the top two causes here relate to about 79% of the unsatisfactory customer service.

The top three causes are approaching looks like about 91% and so on. This line is just a cumulative distribution of the causes and shows you essentially what the Pareto chart is, and it’s an essential quality tool.

How do we use Pareto Chart?

It is used to show the most important causes clearly, and in doing and therefore, it’s used to set priorities. This means that the focus of any improvement effort or defect reduction effort should usually be on the first category.

The first category is the most frequent category and, therefore generally, the most important category.

How do we use Pareto in General Life?

It brings the idea and importance of Pereto thinking.

What is Pareto thinking?

Pareto thinking is that a small number of things are responsible for the vast majority of the result.  This is profoundly important.

Applications in the context of Six Sigma

Within an organization, a small number of processes will be responsible for the vast majority of the organization’s performance.

For example, the vast majority of customer satisfaction as capture above.

This is because they happen relatively frequently, and there are a small number of them and the amount of the work that doesn’t fall into those categories, which will only be 20% of the work that will have to be handled on a custom basis.

Guide to Online Shopping in 2022

Laws and Regulations to Consider Before Starting an Online Liquor Store