What is Pareto efficiency ?

Pareto efficiency is a type of economic efficiency that applies to the allocation of resources. It states that an economy can’t be made more efficient by reallocating resources without making someone worse off.

Pareto efficiency is a type of economic efficiency that refers to allocating resources where no further reallocation would make any individual better off without making another individual worse off.

Pareto efficiency, also known as Pareto optimality, is the goal of any economy. An individual would find it impossible to move from one state to a more desirable one without passing through at least one other state that is less desirable. The diminishing marginal utility law is used to assert that an individual can no longer be made better off without making another individual worse off.

Pareto efficiency, or the 80-20 rule, is a principle that states that 20% of inputs are responsible for 80% of outputs. This principle was first introduced by Italian economist Vilfredo Pareto in 1896 and has been used to analyze income distribution and other data types since then.

This principle’s idea is that it’s possible to increase total output without increasing input if you focus on the most productive areas.

For example, if you have 100 people working at a company and they’re all doing an equal amount of work, then 20 people will be producing 80% of the company’s output.

Pareto efficiency is a situation in which the total value of production is maximized. This occurs when all inputs are used to their fullest potential, and nothing is wasted.

The Pareto Principle applies to a wide range of things, including business, economics, and engineering.

For example, if you have 100 workers who can produce 100 widgets per day, but only 50 of them are needed for production that day.

Then those 50 workers should be assigned to producing as many widgets as possible while the other half takes a break.

An economy is made up of two people and two products, apples and bananas. Person 1 prefers apples to bananas (the more bananas she has, the worse off she is), while Person 2 prefers bananas to apples. There are 100 apples and 100 bananas to choose from.

The only Pareto effective distribution is one in which person 1 has all of the applies and person 2 has all of the bananas. On some other allocation, one of the people has some units of good she doesn’t like and would be better off if the other person had them. 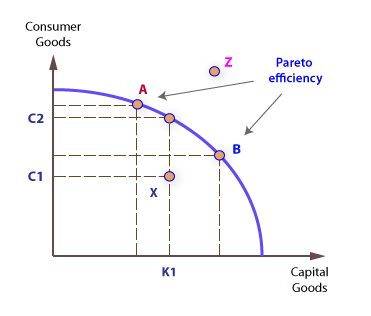