Michael Porter proposed the diamond theory of competitive advantage in 1985. Porter’scompetitive advantage theory suggests that countries and firms should pursue policies that create high-quality goods to sell at high prices in the market. Porter’s Theory emphasizes productivity growth as the focus of national strategies.
Porter Diamond, also called the Porter Diamond Theory of National Advantage, is a theoretical model designed by Porter to help analyze the competitive advantage that a company has due to certain regional factors and suggest how governments can act as catalysts to improve productivity and growth.
Porter’s Diamond is a model that is often used to analyze the external competitive environment or marketplace, which helps companies determine relative strength and explain why certain industries have become competitive or possess regional advantages.

Michael Porter’s the Diamond Model was published in 1990 in his book The Competitive Advantage of Nations. It is a model that can help us understand why a nation becomes the home base for successful international competitors in a particular industry and other nations don’t.

He argues that the old theories proposed by Adam Smith and David Ricardo are not sufficient to explain competitiveness between technology advantage in today’s nations.

In this diamond model, the regional advantages can be assessed by four factors, which include; This is a graphical representation of Porter’s Diamond showing how the four factors interact. The model also points out that two additional determinants influence the four main determinants. These are government policy and the role of chance events.

Factor (input) conditions are the factors of production that include skilled labor, education, capital, climate, and infrastructure.

The first demarcation is between advanced and basic factors. Advanced factors of production are skilled labor, knowledge, capital, and infrastructure.

Any company can obtain basic factors such as unskilled labor and raw materials on do not generate a competitive advantage.

The second distinction is between specialized and generalized factors. Specialized factors involved narrowly skilled personnel infrastructure with specific properties, knowledge bases in particular fields, and other relevant factors to a limited range or even to just a single industry.

Examples could be a scientific institute with expertise in optics, a port specialized in handling bulk chemicals, or a pool of venture capital seeking to fund software companies,

Germany has possessed a competitive advantage in automobile production for many years because the nation has advantageous factors through its highly educated personnel, such as graduate engineers and computer scientists, and the industry has specialized factors. They have highly skilled workers trained in specialized apprenticeship programs and graduates from special university programs.

Demand condition is a country with sophisticated home buyers that have been aware and demand for advanced quality and innovative products, which can create international competitiveness.

The main factor is home demand conditions, which influence nearly every industry.

The composition of home demand shapes how firms perceive, interpret, and respond to buy a need. Nations gain a competitive advantage in industries where the home demand gives local firms a clearer or earlier picture of buyer needs than foreign rivals can have.

Size of the Market

Gradually, the country will achieve a competitive advantage in such production.

As significant as early home market penetration is early or abrupt saturation. Early saturation forces companies to continue innovating and upgrading, and finding international markets for their products.

This is because buyers have homogeneous tastes combined with sophistication and status consciousness. This combination gives them a competitive advantage in comparison with foreign rivals.

Related and supporting industries are the imports for a company with drives success; for example, raw materials from fabric supplies in Italy help drive the fashion Milan industry’s success.

The presence of internationally competitive supplier industries in a nation creates advantages in downstream industries.

It gives efficient, early, rapid, and sometimes preferential access to the most cost-effective inputs.

The benefit of home-based suppliers may be found in the process of innovation and upgrading firms gain quick access to information to new ideas and insights, and supplier innovations.

An example is pharmaceutical firms that use the same university when testing new drugs.

Firm strategy and rivalry is the competition in the home market that drives innovation and quality. When there’s lots of competition and lots of rivalries, these keeps companies on their toes, and so they try to out-compete each other by continually developing more innovative and quality products and services.

Conditions of the Nation

Many aspects of the nation too numerous to generalize influence how firms are organized and managed.

These, in turn, grow out of the educational system, social and religious history, family structures, and many other unique national conditions.

Sharp differences exist within and among nations in the goals that the firms seek to achieve and their employees’ and managers’ motivations.

There are also times when the government could also influence a regional advantage. It influences all four of the determinants through various regulatory and deregulatory measures.

Policies implemented without consideration of how they influence the entire system of determinants are likely to undermine national advantage as they enhance them.

Government effects factor conditions in many ways. Among the most important government roles are creating and upgrading factors, whether they are skilled human resources, the basis for scientific knowledge, or infrastructure.

Among these factors, there is little doubt that education and training are decisive in national competitive advantage.

The fact is that world standards for workers, technical personnel, and managers are high and rising. No nation will prosper unless its citizens meet them.

Government procurement can be a positive force for upgrading national competitive advantage if they provide early demand for advanced, sophisticated products or services from local firms.

An example is the Danish government’s early decision to pay for hearing aids for those who needed them. This was an important reason for the international success of Danish firms in this industry.

The government’s effect on unrelated and supporting industries. The government must support these industries in the same way as the industries that have the advantage. Government has an important role in nurturing and reinforcing clusters.

The government’s effect on firm strategy, structure, and rivalry. Government policy has numerous ways of influencing how firms are created, organized, managed their goals and how they compete.

Sustaining and enhancing competitive advantage requires that a nation’s firms take a global approach to strategy.

Government policy should seek to avoid currency restrictions, restrictions on foreign investment, and restrictions and the inflow and outflow of skilled personnel that impede internalization.

This is chance events are developments outside firms’ control over the nation’s government, such as pure inventions, breakthroughs in basic technologies, wars, external political developments, and major shifts in foreign demand.

They create discontinuities that can unfreeze or reshape industry structure and provide an opportunity for one nation’s firms to supplant and others.

The Diamond Model must be seen as a system. The effect of one determinant often depends on the state of others.

An example where Porter’s Diamond came in use to explain a region advantage is in Germany’s luxury, high power car manufacturing industry for the brand.

The German automobile industry has a national competitive advantage. The industry has four major players. These are VW, BMW, Mercedes, and Opel, and they are all placed in the south of Germany.

The other determinants influence the factor conditions in different ways. Home demand influences the particular types of factors that are created in demand conditions. The German automobile buyers have sophisticated demand. They expect better on better cars.

This tends to channel social and private investments into related factor creation. They have well developed, specialized educational and scientific institutions geared towards the automobile industry in the south of Germany.

The pool of factors on the rate at which they are created is also shaped by the presence of related and supporting industries.

The automobile industry is supported by companies such as Bosch, and the IT company, SAP. These companies belong to industries that possess or stimulate their own mechanisms for creating and upgrading specialized factors.

Some of the factors are usually transferrable, such as ERP Systems from SAP.

A cluster of domestic automobile rivals stimulates factor creation. The automobile industry is viewed as prestigious in Germany; it stimulates the best job seekers to invest in gaining specialized skills.

The presence of successful related and supporting industries can also enhance international demand for German cars. The overall image of German products as high quality is also carried over to the car industry.

The internalization of home demand of high-end cars has a factor creating mechanism. The automobile industry will attract foreign students and firms, making training and education in Germany the industry’s Center for Innovation.

Factor conditions in the automobile industry, especially factor creating mechanisms, have influenced the development of related and supporting industries.

The universities in the automobile cluster will educate students on IT excellence, such as Computer-aided design & computer-aided manufacturing (CAD/CAM) with case studies from the industry.

The concentration of rivals in the German automobile industry has led to the growth of thriving and a highly specialized group of supplier industries ranging from light bulbs, tires, brakes, different materials, composites, etcetera.

The rivalry in the German automobile industry is almost personal. They all want to deliver the next wonder Car.

Related and supporting industries will deliver new ways of doing things to the automobile industry.

The factor conditions could nullify or reinforce the international advantages of the industry in Germany. Specialized factor creation mechanisms could spawn new entrance or usually startups in the industry.

One of the universities could be the source for an energy-efficient CO2 neutral high-performance car. This would, of course, affect the strategy of the firms in the industry.

The change from petrol-driven cars to another energy source will create discontinuities that allow shifts in a competitive position.

It has the potential to nullify the advantages of the firms in the German automobile industry and creates the possibility that a new national car making industry might supplant them. 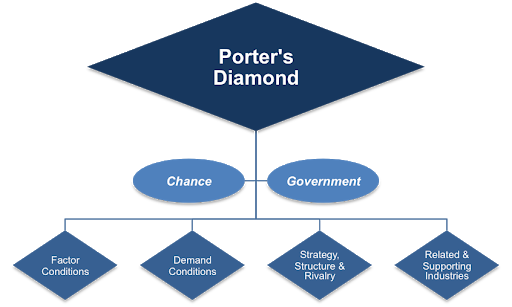 From the above, it is clear that Germany’s car manufacturing industry has a regional advantage because it satisfies the four key factors in Porter’s Diamond.

With first strategy and rivalry, we see strong rivalry amongst lots of car manufacturers, so they compete intensely and keep developing more innovative and quality products.

There are certain demand conditions amongst car buyers.

There are no speed limits in Germany, so the own sophisticated buyers what more powerful cars, therefore the industry, and develop innovative engines to care for this particular need.

There are related supporting industries such as the iron and steel industry in Germany, which provides materials for the car manufacturers.

There is also a high level of education and training within the workforce. Banks also provide capital, and they’re also component supplies and IT infrastructure.

They’re also factor conditions, including skilled engineers from renowned universities and the government’s focus on scientific research, which helps to push the car manufacturing industry.

The government has played an important role in creating a regional advantage as it supported and funded scientific research launched the construction of more roads and canals in the 19th century.

By satisfying all these factors, in Porter’s Diamond, it, therefore, helps to explain why Germany’s luxury high power car manufacturing industry has a regional advantage.

Criticisms of The Porters Diamond Model.

Nevertheless, these limitations do not undermine the significance of porter’s national competitive advantage theory, especially in advanced industries located in advanced countries.